Back to all posts

“We become Just, by doing Just acts; Temperate, by doing Temperate acts.”
–Aristotle.
These are potent words that echo in my mind while pondering the meditation at hand. I have read Aristotle and Plato (among others) extensively since I was a child, as my family has always had an inclination for philosophical studies, both in the Western and Indigenous realms. The question here is how we address the possibility of fitting virtue ethics into a consequentialist frame of mind, and what factors would be chosen for decision making. Let us take, for example, the case of Dr. Kevorkian (a.k.a. Dr. Death) and his ethical arguments for physician-assisted suicide and euthanasia. Most people would label him a murderer; consequentialists would praise him as a moralist, and virtue ethics would put him through the ringer. So how can we break down this argument? The most interesting part about this philosophical meditation is that we must analyze each theory to see where the similarities and differences lay.
Aristotle’s Virtue Ethics can be broken into two parts. Eudaimonia (Highest Good) and the actual Virtues (Aretȇ) with which we attain it. Morality is about developing a person’s character, in such a way that would grant the person the ‘Greatest Happiness’ and grant then the ability to both want to do the right thing and know what the right thing is. Further, while there is no obligation per say, the wise person still pursues the right path. According to Aristotle, the “Greatest Good/Happiness” (whatever that turns out to be), must contain 3 characters:
1)    It must be desirable for itself
2)    It must not be desirable on account of other goods
3)    All other goods are desirable for its sake
Also, while Aretȇ must be practiced, each virtue in-it-of-itself ‘Happiness.’ Within this theory, there are two types of Virtues: Moral and Intellectual. He believed that without one, there could not be the other, to achieve true Virtue, and thereby reach Eudaimonia. The main point of this argument is that intrinsically we must follow our reason and that we do not pursue things like wealth and health because we believe them to be ‘Well-Being,' but because they promote ‘Well-Being/Happiness;’ This is called the Function Argument. (See Illustration below) 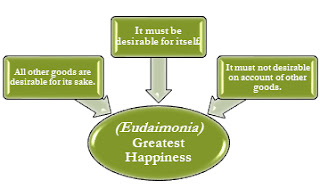 For example, if someone thinks they are ‘Happy’ because they are rich or famous, then they are wrong. Aristotle says when you pursue wealth, what you desire is not the riches themselves, but what they can buy for you; confusing the endwe strive for, with the means towards that end . Therefore, ‘Happiness’ could never be the means to anything; it is the most final and absolute thing that we strive for, with reason. The virtuous mean will lay between two extremes, in the middle. With Dr. Kevorkian’s case, in which the ethics under which he performed such assisted suicides and euthanasia, he considered compassionate, therefore Moral and Intellectually Ethical; he believed he was practicing Aretȇ functions with the ultimate goal being Eudaimonia=Death to a terminal patient living an insufferable physical existence. Can we argue with that using Virtue Ethics?
Similarly, the philosopher Emmanuel Kant’s morality is also based on making a decision on Duty, and that action should be performed based on the ‘Right Intention.' This Deontologistperspective, Kant says carries a Categorical Imperative: One’s actions can only be justified if it could be turned into a Maxims or universal law to be applied throughout the world.
Using Kant’s imperative, Dr. Kevorkian would be placed under the microscope, and the categorical question asked would be: If we allow the behavior of assisted suicide and euthanasia, would it then be Morally justified as the Right Intention so that it would then be universal justification for worldwide adaptation of the process? In other words, if we allow Dr. Death to continue his mission without arrest or consequence, then the imperative will be that it is ok for anyone in the world who chooses to do this, to do so. Those would be the implications; under this theory. 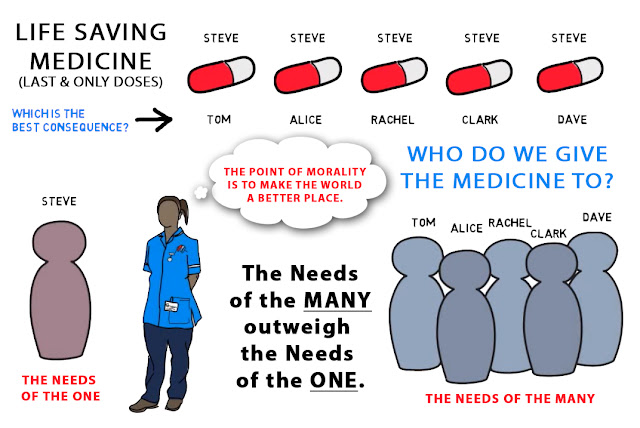 On the other hand, we still have the Consequentialist theories of moral evaluation, which have two parts. One part is an account of ‘What is Good.’Another is an account on ‘How to Approach the Good,' such as the property of being right. John Stuart Mill, subscribed to the thought that the only way to judge if an action is morally correct is if the action maximizes the best possible consequences, for the greatest number of people . So in effect, with the example above from the illustrations, we prove the consequentialist theorem with the following facts:
1)    Steve is terminally ill, and needs five doses of medicine to get better, and live. He is One.
2)   Tom, Alice, Rachel, Clark, and Dave all are sick too but need only one dose each to get better and live. They are five individuals. They are the Many.
According to Consequentialist Theory, The needs of the Many outweighs the needs of the Few. To give the medicine to the many is in effect the right thing. 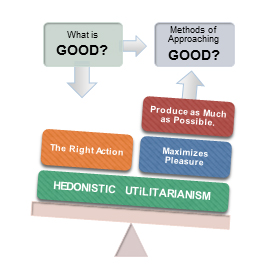 Applying these Consequentialist Ethics to the Dr. Kevorkian case we have to weigh out the consequences of the actions taken:
a)    The consensual death of an individual.
b)    The pain and suffering incurred if action is taken or not taken.
c)    The effects on the family of the person(s).
d)    The legal ramifications of these actions.
Utilitarianismtells us that the Right Action is the one the Maximizes Pleasure (Happiness); the action that has the best overall consequences, in terms of the production of pleasure. This is similar to the Hedonistic view, which is the theory that pleasure is in intrinsic good; and the approach to pleasure is to maximize it, or to produce as much of it as possible. Following the precepts of these two theories we can place the facts of Dr. Kevorkian’s case on the scale, and find that under the Consequentialistview he would be considered to be performing the Right Action, by maximizing the greatest good (pleasure), which in this case was the patient’s wish to die. The consequences, in this case, for NOT performing the action (euthanasia), were that the individual would continue to live a painful and insufferable existence. Therefore, through reason of logic, the negative consequences are far outweighed by the benefits of performing the Right Action, or the Greater Good. Remember that in Consequentialism the point of morality is to make the world a better place.
As a consequentialist, I would argue that Dr. Kevorkian performed what he believed was his moral and ethical duty, as a physician, and the thoroughly had considered the many consequences of his actions; therefore coming to the conclusion that he was acting rightly. During his interviews, he always held steadfast to his beliefs that the individual has a right to end their own life on principle, that it is no one else’s decision but the person’s; very much engaging in a Utilitarian methodology. Conversely, while watching and interview on CNN that was archived from 2010 (a year before his death), he was asked once he got out of prison, if he would do it all over again, and help over 130 people “Die” on their terms? Kevorkian answered, “I would have done it sooner, while I was younger!” “The ethics will guide these actions in the future, not the law,” he added.
JUST FOR FUN...
BREAKING BAD CONSEQUENTIALISM